on July 13, 2012
While I intend to use this blog as a platform to share things I have made, I can't lie to you. The spark, the motivation to set this up, above all else, was my desire to share an ongoing, true story with you.

It starts with Google.


Two quick facts:
One: I am a closet narcissist; Two: I have a reasonably unusual name. Granted, it's hardly Demetrius Breedlove or Maurice Micklewhite, but, still...

Those two facts mean I am prone to googling myself from time to time. You have to keep an eye on things, you know.

For the last 15 years or so, googling Eddy Baker would have simply offered you a page or two of results linking you to Mary Eddy Baker. She's the founder of Christian Science and the bane of my self-googling existence.


So when a few work colleagues began engaging in a lighthearted spot of self-googling earlier this week, you can imagine my utter surprise when I googled myself and this appeared: 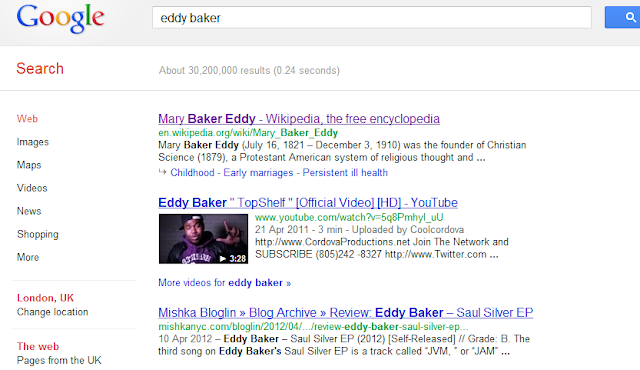 Look at that second entry. And the third, too.

In case I need to point out: that is not me.

This was mindblowing. Not only had I found a namesake who spells his name exactly the same as me, he's a musician like me.


And the fucker's more successful than me! He has a video! And look at that third google search. His music has been reviewed by an actual person.

I had to know more. I read the review, at which point I felt a pang of sadness that the following sentence exists, yet is not about me:

Eddy’s vocals and the beats stay chill. It’s actually impressive how Eddy make a line like “motherfuck a fucking rat. Shoot him with the gat” not sound angry.


In fairness, I doubt I could stay chill while attempting to motherfuck a fucking rat. It's just not a core skill of mine.

Okay... so this is probably a good point at which to mention I'm not much into this kind of music. I like a fair amount of rap and hip-hop, but on the whole I'm a rock and punk fan. I like guitars, drums and shrieking.

Yet, still, I felt like we had so much in common. I mean, Eddy Baker. Eddy Baker.

I did an image search instead, at which point I saw something that endeared me even more towards my stoner-rapping namesake:


See, I love puns, as my girlfriend will wearily attest to, and a little part of me fell in love with Rapper Eddy for demonstrating an appreciation for just how good our surname is. I have had 26 years of fun with this surname. Albeit without ever being in the position of someone photographing me eating a reference to my own name. I am.... so jealous.

After downloading the above image and making it the desktop wallpaper for my work PC, I went back to the review. My eye was caught by the first comment posted at the foot of the review:

And then it hit me.

See, I'm on Twitter, and when I first signed up, I thought it was odd that I had to settle for the handle @EddyJBaker. It hadn't occurred to me to find out who the hell had beaten me to @EddyBaker.

A cursory glance through his timeline and photos reveals a rapper who very much enjoys his weed, beer, and more weed. And one who has over a thousand followers. That profile picture is him with his nose in a massive jar of pot, by the way. Did I mention he really likes weed?

There was only one thing to do. I had to tweet him. I had to make first contact. He had to know I was out there, and I had to know he knew he wasn't alone.

So I contacted him, using the only greeting style I've ever trusted:

In fairness, it was a gamble. I recently tweeted Arsenal striker Robin Van Persie with the same picture in an effort to persuade him to stay at the club. He's since decided not to renew his contract. Clearly not a mere coincidence. So I knew by this point I was playing with fire.

Except, Rapper Eddy didn't respond. I waited a day, but nothing.

I was confused. Surely he gets notified of new followers, of tweets directed to him? Surely, even amongst the throng of followers he must have, he'd notice someone with exactly the same name tweeting him?

But, no. Eddy J Baker and Eddy Baker continued to move along with their lives, each independent of the other. He continued to tweet.


Tell me about it.


But still no reply.

I tried to appeal to his business sense:

@EddyBaker I was just thinking, we could start a Bakery, called Eddys Baker. Hm. I haven't thought this through. Let's brainstorm!
— Eddy Baker (@EddyJBaker) July 11, 2012

Just as I was in my deepest trough, drowned by my own utter failure to engage successfully with my long lost twin, I decide to try a slightly different route.

The quickest way to a man's heart is through his stomach, right? And we've already established this is a man who A) Likes his baked goods and B) isn't afraid to show it.

And C) is almost definitely on a permanent case of the munchies.

So, I tried a bit more direct:

Finally! Finally, he had responded. And he had responded specifically to let me know that he liked pie. Not, "Hey, we have the same name", or "why is this random Londoner tweeting me about cakes". Just: "I like pie".

I love this fucker!

Better keep this going, I thought. No idea when I could lose him. Stick to what he likes.


I was going to say "steak and ale pie" here, as that's actually what I meant, but I wasn't sure if Californian rappers know much about ale.

Turns out he just really, really likes his weed:


Now I didn't know what was going on anymore. Were we just listing baked things we liked? Was this a word association game?


And after that, he stopped replying.

I couldn't believe how foolish I'd been. I was on the cusp of establishing a real rapport with this guy, and I'd gone and blown it by alarming him with a french pastry. It was too soon, dammit. He wasn't ready.

I kept an eye out for more replies, or some reference on his timeline to my existence. But nothing. Well, I did have one false alarm, but in hindsight I probably should have realised: