on April 19, 2019
This was another true story written for Tenx9 in Belfast - see my Dodger story for the other one. To hear me reading this in front of a live audience, listen to the podcast here: http://www.tenx9.com/podcast/085-danger-part-1/2019/3/2 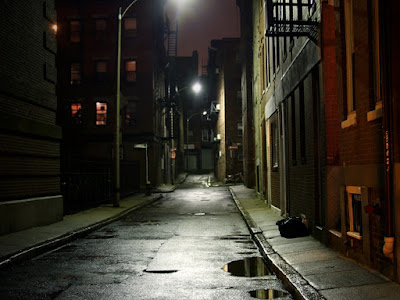 “You know something, Eddy”, says Pete, as we stand and watch the bus drive off into the night. “We are such good people”.
I laugh as we pick up our guitars and cross the road towards our bus stop.

Pete is declaring us a couple of good boys, because we have just helped a slightly drunk young woman to get the correct bus home. We’d insisted on waiting with her until her carriage arrived, consequently declaring ourselves streetwise saviours of the night.

So now, as I’m squinting at the bus timetable in the dim, flickering lights of the shelter, Pete is still talking about our moral fortitude. But then he trails off.

“We’ve got knives”, declares my scary man, gesturing towards the outline of a blade poking out from his jacket pocket. “Give us your phones and whatever’s in your wallets”.

I mumble a few swear words, but surrender more or less immediately. This is largely because Pete and I have made the same crucial observation: they have not asked us to hand over our guitars. I have no problem handing over my phone, or the ten pound note in my wallet, but my beloved 1966 Fender Jaguar is absolutely the sort of possession I would do something stupid to hold onto.

We produce our wallets first. I offer the ten pound note, and find myself apologising that I'm not holding more. But then I look over to Pete, who is emptying a handful of change from his wallet and holding it out to his scary man. “Sorry mate,” Pete says, “I’ve only got shrapnel”. Scary man refuses to take it, deciding the paltry sum is not even worth the effort of holding out his hand.

This has me wondering if I should interject to suggest a cost-benefit analysis - an appraisal of the time they’re currently spending on this so-far fruitless endeavour. But I don’t want to push our luck. Think of the guitars, Eddy.

“Your phones”, barks one of the men.

Pete offers his first, a retro Nokia-style handset, the sort that can text, call and nothing else. His scary man snorts with derision, and declares “I’m not taking that piece of crap”. My phone, on the other hand, is a little newer than Pete’s, so my scary man happily takes it off me.

“Could you do me a favour”, I find myself saying, my mouth apparently speaking without permission of my brain. “Can you give me back the SIM card?”.

He shrugs and pops off the back cover of my phone. He then starts trying to find the SIM card, but it’s dark and these things are quite fiddly. I start trying to help him. “Yeah, it’s there, no you have to sort of push it in first, then it releases”. It takes him so long to get the SIM out, all four of us become invested in the challenge, working as a team toward a common goal.

So when he finally releases the SIM and hands it back to me, I feel like we’ve all bonded slightly. I almost feel like clapping my hands together and saying, “Well, what are we all doing after this, guys? Drinks round mine?”.

I don’t say this, I just I pocket my SIM; he pockets my phone. Then, his eyes lock onto the guitars.

I freeze up. Adrenaline starts flooding my veins. “We’re not going to take your guitars, mate”, he says. “That’s your livelihood, innit”.

I’m so stunned by this comment. The very idea that we make any money from our band. Clearly he has never heard us. I’m still processing this as the men take a step back, and use a particular four letter word to invite us to leave the immediate area.

We march up the road as fast as we can, not once looking back. It’s a twenty minute walk to my flat, and despite the heavy equipment on our backs, we do it in fifteen. On the way we remember that Pete still has his phone, so we call the police as we walk. They tell us to stay put and wait for a unit to come to us, and I use a particular four letter word to disagree with that suggestion. I give them the address of my flat and tell them to meet us there.

A few minutes later two police officers arrive. We sit in the back of their car to make our statements. One of the police officers becomes visibly irritated because I can’t tell him the colour of either scary man’s jacket. The bus shelter was unlit, after all. And so I start explaining that, actually mate, there are two types of photoreceptors in the human retina: rods and cones. Rods are responsible for vision at low light levels but they do not mediate color vision. He stares at me. Pete stares at me. I stare at my feet.

After the statements are taken, the officers ask us to go for a ride with them, to see if we might spot the muggers. Pete declines, as he is by this point exhausted and just wants to sleep. But I gleefully accept the invitation.

We drive over to the scene of the crime and we’re immediately flagged down by a young man, who reports that he’s just been mugged at knifepoint while waiting for a bus. I squeal with excitement, which causes him and the police officers to turn and stare at me. I’m just excited to compare notes, is all.

The officers tell the guy to hop in and we all go for a ride around together. By this point, I am under no illusions: I am having a lovely time.

The young man’s name is Chris, and he lives locally. I only know this from listening to him give his statement; he is not interested in making small talk with me - even after he gets stumped by the jacket colour question and jump in to start going on about rods and cones again.

After a few minutes of driving and hushed conversation, the police officers inform us that they have a couple of suspects in mind. They are going to raid the suspects’ last known address. They want us to wait in the back of the car while this happens, and they will then bring the suspects past the car for us to identify.

Somehow the officers convince him to join us, and we are driven to a nearby tower block estate . A fleet of police cars are already waiting, including a number of dog units. I start excitedly pointing at the dogs and telling Chris about them. Chris stares out of the opposite window, shaking his head and trying to ignore me.

The officers all head off into the tower block, and leave Chris and I in the locked car. We wait in the car... for an hour and a half. Chris resists all of my attempts at small talk.

When the police officers eventually come back, they look surprised to see us. It is clear they had forgotten we were in the car.

And so, visibly embarrassed, they drop off Chris and myself at our respective homes. Chris does not even say goodbye as he gets out.

So now it’s just me and the two police officers. I turn to them, and clap my hands together.

“So, what are we all doing after this?”