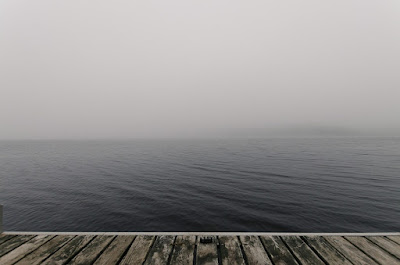 We arrived at Cushendun via a small gravel car park, which appeared into view at the conclusion of our sat-nav’s instruction. Driving out from Belfast, Joan and I had told the software to follow the picturesque coastal route, despite our knowledge that this would add fifteen minutes to the journey time. The sat-nav had opted to override this instruction, and so we unwittingly embarked on a faster, yet terrifying journey through winding, uneven roads that veered to and fro, sometimes emerging onto sheer, heart-stopping drops or teeth-grinding ascents. All the while tailgated by red-faced men in Audis, men visibly enraged by our refusal to take these hairpin bends at more than forty miles per hour.

We arrived, shaken but no less enthused for a day out in national trust territory. The car park was strangely silent, and we found it initially hard to place our bearings. A thick fog had descended onto the town, the effect being that there was no visibility beyond the borders of the place. The mountains and hills around us disappeared upwards into this thick, misty ceiling. It was as though some watcher from above, afraid of what this place contained, had sought to quarantine it from the outside world. The gravel car park overlooked the sea, but as we exited the car and looked out towards it, we saw only a wall of white mist.

It was oddly, deathly quiet, wherever we went. Initially we put this down to the bank holiday, and the fact that the Irish open was on. The only visitors we did see were white-haired, middle-class English people, presumably on day trips from wherever they were staying at for the Open. They spoke in fearful, hushed tones as they explored the derelict town.  Aside from these groups of khaki-clad holidaymakers, the town appeared deserted. The mist appeared to have the added property of insulating and slowing sound, as I realised with horror that I could hear neither the reassuring hum of distant roads, nor the soft, lapping waves of the sea. At one point I saw a group of children enjoying a nearby playpark, before the realisation dawned that they were totally silent. My hands clammy and my mouth dry, I turned to Joan and shared with her my fear that we may die here today.

We went to a pub opposite the national trust centre for some lunch. It was so quiet in there that you could hear only clinking cutlery and murmured conversation. My terror grew stronger and stronger. After eating some deep-fried miscellany, we ventured to a nearby cave, which we were indifferent to learn had featured in the T.V. serial “Game Of Thrones”. This was less of a cave and more of a musty navel embedded in the landscape. A thick mould layered the walls of the navel, a vague odour of vanilla hanging in the air. A woman asked me to take her photograph, and upon doing so I was chilled to discover she appeared  in the resultant image to be glowing, a deathly, ethereal glow that filled me with a sense of dread and foreboding.

We walked back towards the car park, passing an abandoned hotel on a concrete seafront. Two men sat at a table outside a pub, staring out to sea. I noticed with some consternation that the pub, too, was abandoned, its windows put in and its exterior walls decimated with snaking, consuming ivy. I dared not guess what was in the pint glasses from which the fellows were drinking. The older of the men smiled in my direction, and I noticed he was missing one eye and several teeth. I smiled back, although in my terror I am sure I returned more of a pained grimace.

The silence that had followed us everywhere was suddenly and violently punctured when we returned to the car park. This was a gravel park near a stately manor. It had been empty when we parked in the morning. It was now full, mostly with caravans. People had arrrived in caravans and appeared to have set up shop for the day. The car park was a cacophony of generator noises and barking dogs. A climbing frame overlooking the site was covered in crawling, screaming children.

We ventured into the nearby woods to search for red squirrels. We had read that they were prevalent in this area. But the screaming of children and rumbling of generators followed us, no matter where we headed. There would be no red squirrels today; the auburn rodents having been scared deep into the forest by the noise. We saw a footpath beyond a low wall, and headed towards it. Joan stepped over the partially-devoured corpse of a crow. I helped her over the wall and we walked, wordlessly, towards what turned out to be a ring-road circling an upmarket caravan park. The sky grey and the air thick with humidity and death, we looked through the gates of the caravan park. Caravan owners stood on the tarmac drives beside their mobile homes, staring at us, their mouths opening and closing slowly like fish. I shivered, and we walked hastily back to the car park.

We got in the car and I drove us out of there as fast as we could, barely looking in the rearview mirror as we sped through the fog and back towards the sanctuary of home.

As we arrived home, Joan asked me if I’d had a nice time. I said I had.
“You sure?”, she asked. “You’re not just saying that and then you’re going to go and write some over-dramatic story for your website, about how it was the worst place you’ve ever been to? Are you still sulking because  I wouldn’t let you stop for ice cream?”

I stared at my feet.

They had pistachio flavour. And salted caramel. And mint choc chip!