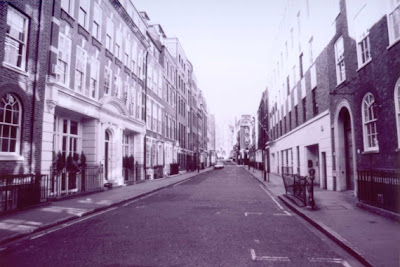 I’m walking along a quiet side-street, on my way to work, and a little bit ahead of me is another bloke. He’s crossing the road up ahead and as he goes to step off the kerb he sort of trips a bit. Then he has a quick look over his shoulder, in that way we all do when we trip, when we’re checking if anyone just saw that.

But he doesn’t know this. He hasn’t clocked me.

He keeps going, as do I. I get to my turning, onto the road that takes me up to where I work. But I’m conflicted, hesitant to continue my journey as planned. I pause awkwardly for a moment, and then decide to abandon my plans. I turn away and instead start to follow this bloke.

He’s now on another road, a main road - much busier here - but he hasn’t gotten too far and I’m soon about 50 yards behind him, pushing my way through the crowds, trying not to lose him. I see him flag down a bus, and I have to break into a jog to get to the bus before it leaves, but I manage just to get on as the doors are closing. It’s rush hour so the bus is packed, and there’s about a dozen people between he and I. He hasn’t seen me. I’m now on this bus going who-knows-where, staring at him, just trying not to lose sight.

After a few stops he gets off, and  I almost miss this because it’s so crowded. So I have to suddenly push my way to the doors before they close again, and I almost lose him in the process. But I get off just in time.

Now I’m spinning around on the street looking for him, starting to panic a bit, but I spot him eventually, about 100 yards away. I start running in his direction because I cannot lose him now. I see him take a turning onto a quiet street, and for a moment I’ve lost sight of him. Now at full sprint, I turn onto the same street, hoping this bloke hasn’t got away.

But there he is: he’s going into the lobby of an office building, a big glass-fronted building so I can still see him from where I am. He greets the receptionist, barely breaking stride, then goes through a set of double-doors just past the reception desk. That must be his office. And me, I’m not far behind. I reach the big glass-front of the building,  enter the lobby, ignore the receptionist’s protests and push through the double-doors to the office: a big open-plan setup with about 60 people in it. Stood at the open doors I narrow my eyes and scan the rows of desks, trying to pick him out.

Then I see him on the other side of the office floor. He’s standing by his desk, taking off his jacket. Exchanging morning pleasantries with his colleagues. Putting the jacket over the back of his chair. By this point a few people nearer the doors have already noticed me burst in - the receptionist is pursuing me - but I ignore them all and make a bee-line for this bloke. One older guy, a portly fellow holding a mug of coffee - perhaps he’s the office manager -, he tries to stop me, but I push past him, spilling his coffee everywhere. Someone else gets in my way, a young woman, and I push her over, causing the stack of papers she’s holding to scatter all over the floor.

The bloke, though, he’s not clocked me, and he’s still mid-conversation with a colleague when I interrupt, stepping right up to him. He stops, turns slowly and looks at me.

I clear my throat.

He just blinks. He looks terrified.

“Excuse me?”, he replies, after what feels like an eternity.

“I just thought I’d let you know, I did see that.”, I say. “When you tripped a bit. On the kerb. Near Laystall Street.”

I trail off. Still looking at him, I take a couple of slow steps backwards. Then I turn, and quietly make for the doors.

60 pairs of eyes watch me the whole way. I try not to make eye contact with anyone, pausing only to offer an apologetic nod to nobody in particular as I leave.

Fucking told him, though.